Skype is a little piece of software that lets you make free calls to anyone else on Skype, anywhere in the world. And even though the calls are free, they really are excellent quality.

Of course you can't just talk to your PC. You need a special telephone or a headset and microphone. Luckily, there are now headsets with microphones and the sound quality is terrific.

The major commercial grade headset manufacturers (i.e. Plantronics and GN Netcom) have now recognised that Skype users are becoming a major marketing force. Skype users are used to putting up with mass produced basic headsets to make their calls. That is now history! You now have wired/plug-in, bluetooth and wireless headsets - all suitable for use with Skype

These headsets are the type used by most Skypers. They range from very basic MP3 style earbuds through to sophisticated full style binaural units. THe earlier models connected to your PC's sound card or motherboard via 3.5mm plugs. The latest models models connect via USB cables and use special software to interface to your Skype program.

These headsets connect to your PC via a USB connection. The base is cabled but the headset "talks" to its base via Bluetooth technology, giving you a range of about 10 metres to wander around in. The first of these was the recently released GN 9300 range. Plantronics is currently in the process of releasing their Voyager™ 510-USB Bluetooth® Headset System to the Australian market. 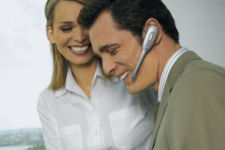 These headsets also connect to your PC via a USB connection. The base is cabled but the headset "talks" to its base via DECT technology, giving you a range of about 100 metres to wander about in. The first of these was the Plantronics CS60 USB. This has been followed by the GN Netcom 9300 series and Plantronics new CS70 USB.