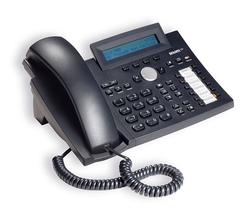 snom phones can be operated with a large number of compatible IP-PBX that support the SIP (Session Initiation Protocol), giving customers a great choice for enterprise communication systems.

Recognized for its high-quality, customizable and cost-effective business solutions, snom is also differentiated by the company's ten-year history in the VoIP industry, and its dedication to high security standards.

Please Note: The model number of your snom telephone can usually be found on a label stuck on the bottom of the phone.

snom phones must have the headset feature activated, otherwise the headset button will not operate. How this is achieved depends upon the firmware that the phone contains:

These phones have a dedicated headset port.

Note: The speaker button can be changed to a headset button by holding down it down for 5 seconds until the symbol changes to a headset.

Plantronics: Any SupraPlus Series headset with a Polaris (U10P) cord.

Note: The Entera Series are not compatible. The headset transmission is VERY soft.

Sennheiser: Any headset with a CSTD-01 cable.

These phones have a dedicated headset port.

Plantronics:
Any headset with a Reverse Polaris Cable (U10P-S).

Note: The Entera Series are not compatible. The headset transmission is VERY soft.

Sennheiser:
Any headset with a CSTD-24 cable.

Sennheiser: Any Sennheiser wireless headset, with the CEHS-SN 01.

These phones have a USB headset support.

The snom USB BT and HS BT are end of life.

This phone has built in bluetooth support.